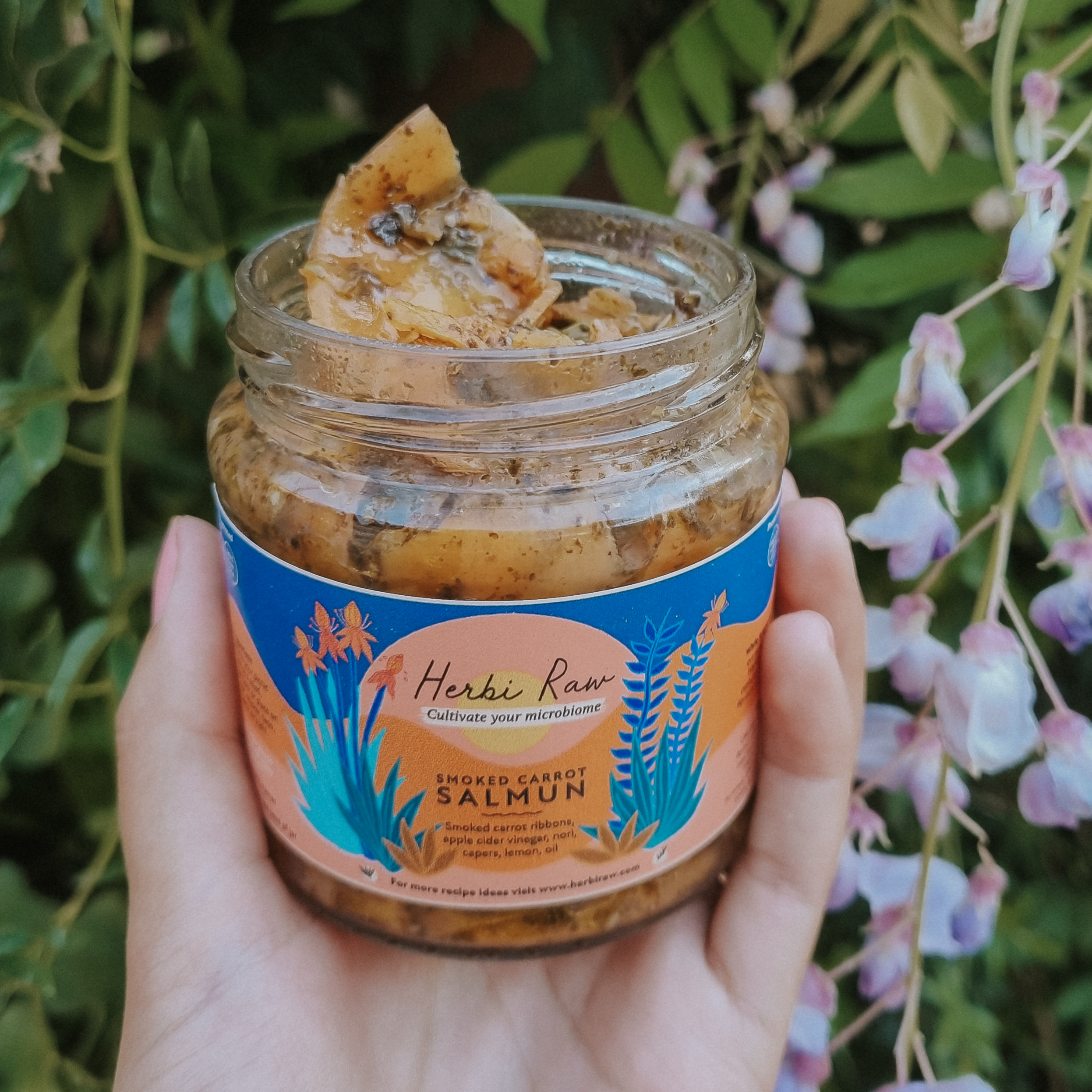 The one thing I hear the most from pregnant women is that they miss eating raw salmon and sushi. For me I started getting those cravings even before I fell pregnant, because I watched a documentary called Seaspiracy and then immediately decided to cut out fish and seafood completely, except if it was caught by someone I knew or the occasional trout.

I found Herbi Raw on Instagram in the beginning of 2021 and begged them to stock a few stores in Johannesburg, fast forward a bit and you can now find them in Jacksons Real Food Market and hopefully a few other stores soon! I knew I had to try it, because I could satisfy my sushi cravings with vegetarian and vegan sushi, but I still missed having salmon poke bowls. I went and got a jar of Salmun, as they call this vegan salmon, and made my poke bowl. It was beyond delicious! The texture is actually very similar to salmon, which surprised me, and although the taste is a bit different, I would go so far as to say that I prefer Herbi Raw’s Salmun over regular salmon! It has more flavor and it also made me feel full and satisfied so quickly due to the fact that it is fermented.

So, what exactly is Herbi Raw Salmun? Herbi Raw was started by Tanita Boswell, with the aim to have and give people the option of having holistic health and being able to cook consciously. She regularly hosts workshops, yoga retreats and many more as part of her endeavor and through this she decided to start selling her Salmun commercially. The Herbi Raw Salmun is made of fermented and smoked carrots with capers, nori, acv, liquid smoke, herbs and oil. The first time I tasted it, I couldn’t believe that it was actually carrots!

There are so many things that I love about this brand and business, to start with the Salmun, it really makes me feel so full and satisfied and this is due to the fact that it is fermented, the downside of this is, that we can’t eat a jar fast enough and the first time it went bad in the fridge! Which is a good sign, because it shows that the ingredients are actually fresh and preservative free! Therefore I would suggest buying a small jar and not buying a week or two in advance as you might be disappointed that it went bad too quickly. Another aspect that I love about Herbi Raw is the fact that they don’t pretend to care for the environment, they actually do! Before it was available in Johannesburg, I asked if I could buy online and courier it to me and they said no as it won’t be worth the impact it would have on the environment and they would rather loose a few sales than have couriers driving up and down for a few jars… what business in 2022 is that serious about their sustainability? Tanita also keeps all the carrot off cuts that is not used and feeds them to local animals and horses, so there is no wastage as well. Their jars are also made of glass and I reuse them in multiple ways!

Herbi Raw’s Salmun is pregnancy and breastfeeding safe and I have been eating it during this pregnancy and it has contributed so much to my gut health and helping me avoid constipation, which is a common pregnancy symptom. According to a few resources, the enzymes in fermented food is actually even more beneficial during your pregnancy as it helps your body absorb more nutrients, which in turn means more nutrients for your baby. The one thing I am unsure about is eating it while breastfeeding as there is different conclusions to research out there and I want to try something first before recommending it to you. Most research say that fermented foods are needed during breastfeeding to protect the mother and reduce the risk of LM development, then there is other research stating that fermented food can contribute to colic in the breastfed baby.

If you are vegan or pregnant and scared to eat raw salmon, I definitely recommend trying Herbi Raw’s Salmun! Also have a look on their website for recipes, workshops and many more!

Want to join the discussion?
Feel free to contribute!

Kombucha during pregnancy? Yay or Nay?

Eliminate plastic from your hair care routine
Scroll to top